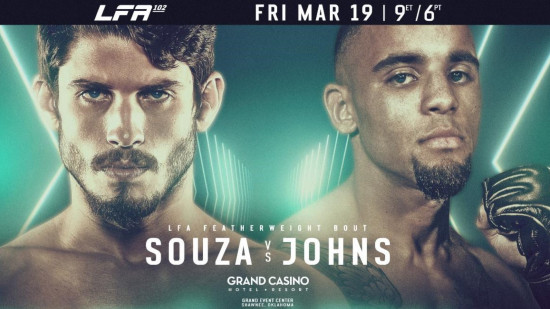 LFA 102: Souza vs Johns Preview: Legacy Fighting Alliance was in Shawnee, Oklahoma for the second straight week on Friday, March 19. LFA 102 was the second of three shows in the Boomer state, with LFA 103 set to go down a week later.

First up, however, was Friday’s card, featuring a featherweight main event between highly touted prospect Bruno Souza of Brazil and Elijah Johns. For those recognizing the Johns name, he’s the younger brother of UFC fighter Miles Johns, no doubt hoping to reach the big show himself in the near future.

Also on the card Friday, a middleweight tournament semi-final featuring Gregory Rodrigues, a.k.a. Robocop, returning from a loss on the Contender Series. The Brazilian was paired up with Al Matavao, with the winner moving on to the final to take on Josh Fremd for a chance at LFA gold.