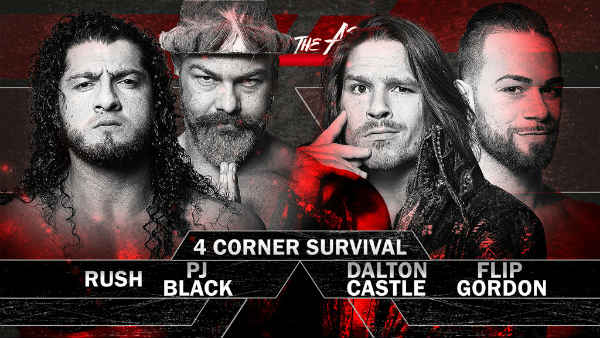 Note : Only a single Match Name Four Corner Survival Match was aired live tonight , the rest show of the day 1 of ROH State Of The Art will be aired as a normal ROH weekly Flagship tv show later

Preview : A huge Four Corner Survival Match featuring top ROH stars will stream live exclusively for Honor Club members on June 1! The undefeated RUSH, Dalton Castle, Flip Gordon and PJ Black will compete in the match, which takes place in Kent, Was., and airs at 7 p.m. Pacific. All four competitors are jockeying for title opportunities, and the ROH Board of Directors undoubtedly will be keeping a close eye on this contest. A compelling subplot of the bout is the bad blood that exists between RUSH and Castle.

Ever since Castle lost to RUSH — who has yet to be pinned of forced to submit since signing with ROH — in 16 seconds at G1 Supercard at Madison Square Garden last month, the flamboyant former ROH World Champion has been a loose cannon. He attacked The Boys on two occasions and cast them aside, and he also has turned his back on the fans. Castle has been taunting RUSH as well.

Moreover, RUSH and Castle have been put together by ROH officials as a “wildcard” entry into a tag team gauntlet match that goes down in Portland, Ore., the night after the show in Kent.

As for Gordon, he’s looking for a bounceback win after coming up just short in his title match against ROH World Champion Matt Taven. Black, meanwhile, has put together a string of impressive performances, but he is still looking for a statement win, and this Four Corner Survival Match is a golden opportunity for him.