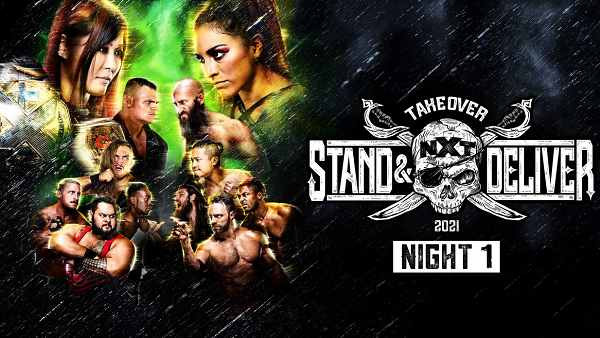 # NXT Women’s Champion Io Shirai vs. Raquel González
* Io Shirai isn’t waiting for her next challenger to step up. Instead, she’s coming to them.
The Genius of the Sky will defend the NXT Women’s Championship against the dominant Raquel González — her opponent of choice — as they main event Night 1 of NXT TakeOver: Stand & Deliver on Wednesday, April 7 and streaming on Peacock in the U.S. and on WWE Network elsewhere, as first reported by “Muscle & Fitness Hers.”
Time and time again, Shirai has soared past the competition, prevailing against the best NXT has to offer. Candice LeRae, Toni Storm, Dakota Kai, Tegan Nox have all failed to knock her from the throne.
Shirai, not one to rest on her laurels, didn’t celebrate her most recent defense against Storm for long, confronting González later that night and demanding to face “Big Mami Cool.”
Few Superstars, if any, have had a more impressive past year in NXT than González. Bursting onto the scene with her alliance with Dakota Kai, González has racked up accolades in short order. She has defeated former NXT Women’s Champions Rhea Ripley and Ember Moon, and with Kai won the first-ever Women’s Dusty Rhodes Tag Team Classic and were crowned the first-ever NXT Women’s Tag Team Champions.
Will “Big Mami Cool” show that her dominance knows no bounds? Or will Shirai’s genius prove unsolvable once again?

# NXT United Kingdom Champion WALTER vs. Tommaso Ciampa
* Can WALTER continue his record-setting reign as NXT United Kingdom Champion against The Blackheart?
The Ring General will put his title on the line against Tommaso Ciampa on Night 1 of NXT TakeOver: Stand & Deliver. WALTER’s indomitable stable, Imperium, courted Ciampa and tag team partner Timothy Thatcher to join their ranks. The Blackheart emphatically declined, and Thatcher, who shares a storied history with Imperium, seemingly disappeared with Ciampa holding Imperium responsible for his absence.
Ruthlessly attacking Ciampa in his stunning return to the black-and-gold brand for the first time in more than a year, WALTER made a vicious example. But The Blackheart came back for more the following week, challenging The Ring General. When Ciampa smacked WALTER after he denied the challenge, The Blackheart was once again subjected to a savage beatdown by Imperium. But when WALTER and Ciampa face off one on one, might it be a different story? As a former NXT Champion who only relinquished the title due to injury, Ciampa knows what it takes to win gold. Will he add a new accolade at NXT TakeOver: Stand & Deliver? Or will WALTER continue to dominate?

# MSK vs. Grizzled Young Veterans vs. Legado del Fantasma for the NXT Tag Team Championship
* New NXT Tag Team Champions will be crowned on Night 1 of NXT TakeOver: Stand & Deliver.
MSK will collide with The Grizzled Young Veterans and Legado del Fantasma in a Triple Threat Tag Team Match for the vacant NXT Tag Team Titles. The titles were vacated from former champions Oney Lorcan & Danny Burch after Burch was rendered unable to compete due to a separated shoulder suffered in a title defense against Karrion Kross & Finn Bálor. NXT General Manager William Regal made the difficult decision, but the bad news came with good news for the NXT Universe in the form of what is sure to be a can’t-miss battle between three of the black-and-gold brand’s top teams. MSK and GYV are already more than familiar with each other. Zack Gibson fractured Wes Lee’s hand in a savage attack in February, costing MSK their initial NXT Tag Team Title opportunity for winning The Dusty Rhodes Tag Team Classic. Gibson got a receipt though, as MSK retaliated by smashing Gibson’s hand against the steps. Meanwhile, Legado del Fantasma also have history with MSK, as Nash Carter & Lee narrowly defeated them in a thriller to advance to the Dusty Classic finals.

# Six-Man Gauntlet Eliminator for an NXT North American Championship opportunity
* Night 1 of NXT TakeOver: Stand & Deliver will feature a test of wills, as six men look to outlast the competition.
Bronson Reed, Cameron Grimes, Dexter Lumis, Isaiah “Swerve” Scott, LA Knight and Leon Ruff will battle in a Gauntlet Eliminator Match with the winner advancing to Night 2 to challenge Johnny Gargano for the NXT North American Championship. The six Superstars qualified based on their performance in an 11-Man Battle Royal on the March 31 edition of NXT, with LA Knight winning to score himself a huge advantage as the final entrant in the bout (full entry order and match rules below). Only one man will claim victory and a potential golden ticket — who will it be? Find out on Night 1 of NXT TakeOver: Stand & Deliver on Wednesday, April 7, at 8/7 C on USA Network and streaming exclusively on Peacock in the U.S. and on WWE Network elsewhere.

Gauntlet Eliminator rules
# Two men will start in the ring.
# Every four minutes, another competitor will enter.
# The only way to be eliminated is via pinfall or submission.
# The last man remaining will challenge Johnny Gargano for the NXT North American Title on Night 2 of NXT TakeOver: Stand & Deliver.

# Kushida vs. Pete Dunne
* For weeks, Pete Dunne has proclaimed to be the best technical wrestler in NXT, and he’s faced little pushback, surgically taking apart opponent after opponent. That is until Kushida begged to differ.
Two of the world’s best will square off to prove their squared-circle supremacy on Night 1 of NXT TakeOver: Stand & Deliver on Wednesday, April 7. Ahead of the Battle Royal on the March 31 edition of NXT to qualify for the Gauntlet Eliminator, The BruiserWeight once again declared his dominance, only to be rebuked by NXT’s resident Time Splitter. The tension spilled over to the Battle Royal, with both men eliminating each other as Kushida refused to break his feared Hoverboard Lock until the two were separated by officials, prompting this bout to be made.
The beef has escalated in short order, and now they’ve cost each other a potential title opportunity. What fireworks will be in store next at NXT TakeOver: Stand & Deliver?