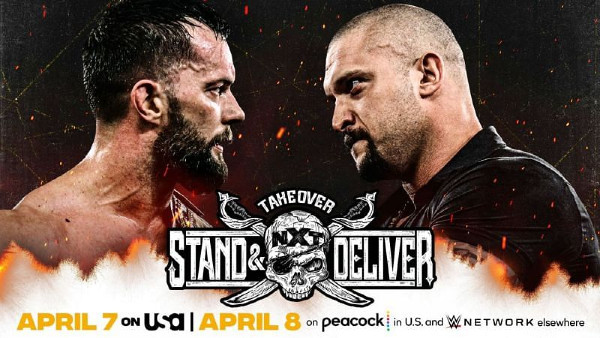 # NXT Champion Finn Bálor vs. Karrion Kross w/Scarlett
* Finn Bálor has been virtually untouchable since his return to NXT, but he’s about to face his toughest test yet as NXT Champion. The Prince will put his title on the line against the undefeated Karrion Kross, accompanied by Scarlett, in the main event of Night 2 of NXT TakeOver: Stand & Deliver on Thursday, April 8.
Bálor has stood tall in the face of all challengers during his six-month reign atop the black-and-gold brand, defeating the likes of Adam Cole, Pete Dunne and Kyle O’Reilly. However, The Prince’s opportunity to become champion emerged after Kross was forced to vacate the title in August due to injury. The doomsday deviant has been on an absolute rampage since returning, dismantling Damian Priest, Santos Escobar and more. The two finally came face to face following Bálor’s title defense against Cole, with Kross locking eyes on The Prince and the championship he never lost. Bálor is perhaps better than he’s ever been, while Kross may be the most unstoppable force in NXT history. When they finally meet at NXT TakeOver: Stand & Deliver, something has to give!

# Kyle O’Reilly vs. Adam Cole (Unsanctioned Match)
* Kyle O’Reilly and Adam Cole will settle their uncontrollable rivalry under the only conditions NXT would agree to: with the black-and-gold brand not responsible for their safety. The former Undisputed ERA brothers are set to clash in an Unsanctioned Match in the co-main event of Night 2 of NXT TakeOver: Stand & Deliver on Thursday, April 8.
A bond built over years of friendship was destroyed in the blink of an eye at NXT TakeOver: Vengeance Day when Cole stunned the NXT Universe by superkicking O’Reilly. The former NXT Champion took it a step further by putting his former friend out of action with a vicious suplex on the steel steps. Though he wasn’t cleared for action, O’Reilly refused to be kept away, and he returned to the Capitol Wrestling Center to cost Cole his NXT Championship Match against Finn Bálor. The bad blood only escalated from there, leading to an altercation that drew police, and later, an unruly skirmish at a gym O’Reilly was training at.
Irate over the Superstars threatening to tear apart the fabric of the black-and-gold brand, NXT General Manager William Regal forced O’Reilly and Cole to come to the table, proposing an Unsanctioned Match in which NXT would not be accountable for anything that happens. Dead set on ending one another, both men were more than happy to agree to the stipulation — even with O’Reilly still not medically cleared. Nothing will be off limits in what figures to be a barbaric brawl as NXT and WWE are not responsible for what happens. O’Reilly is determined to reclaim his soul after selling it for The Undisputed ERA, while Cole is out to show that The UE was only holding him back.
Which Superstar will prove themselves right at NXT TakeOver: Stand & Deliver?

# NXT Cruiserweight Champion Santos Escobar vs. NXT Cruiserweight Champion Jordan Devlin (Ladder Match)
* Who is the true NXT Cruiserweight Champion?
That question will be answered on Night 2 of NXT TakeOver: Stand & Deliver when Santos Escobar and Jordan Devlin face off for the coveted title in a Ladder Match.
Escobar made an instant impact upon his arrival on the black-and-gold brand, winning last year’s NXT Cruiserweight Championship Tournament before unmasking and forming Legado del Fantasma alongside Joaquin Wilde and Raul Mendoza. However, Devlin also never lost his title after capturing it last January at WWE Worlds Collide. Since returning to action on NXT UK, The Irish Ace has been at the top of his game and willing to prove it on any given day, launching an open challenge initiative. He most recently conquered the likes of Trent Seven and even the much larger “Bomber” Dave Mastiff in a non-title bout. They’ve exchanged barbs for months, but they finally came face to face on the March 17 edition of NXT, with Devlin deriding Escobar as merely a “fill-in.” Escobar responded by laying down the challenge for this bout, and The Irish Ace answered with a devastating headbutt and the Devlin Side before Wilde and Mendoza could intervene. A week later, WWE Hall of Famer and Ladder Match pioneer Shawn Michaels symbolically introduced a ladder into the equation, and without a word, both Escobar and Devlin understood exactly what was before them. NXT TakeOver: Stand & Deliver figures to finally put the controversy surrounding the NXT Cruiserweight Title to rest. But who will ascend to the top?

# NXT Women’s Tag Team Champions Shotzi Blackheart & Ember Moon vs. The Way
* Shotzi Blackheart & Ember Moon have made it clear they’ll take on all comers as NXT Women’s Tag Team Champions, and that includes Candice LeRae & Indi Hartwell. Blackheart & Moon will put their titles on the line against The Way on Night 2 of NXT TakeOver: Stand & Deliver on Thursday, April 8, at 8/7 C, streaming exclusively on Peacock in the U.S. and on WWE Network elsewhere. On their history-making run to the finals of the first-ever Women’s Dusty Rhodes Tag Team Classic, Blackheart & Moon knocked off LeRae & Hartwell in a barnburner and have remained red-hot since capturing the titles. But The Way have had their eyes on the gold ever since, and they haven’t been shy about it. They formally issued their challenge after their latest victory, and Blackheart & Moon were more than happy to accept.