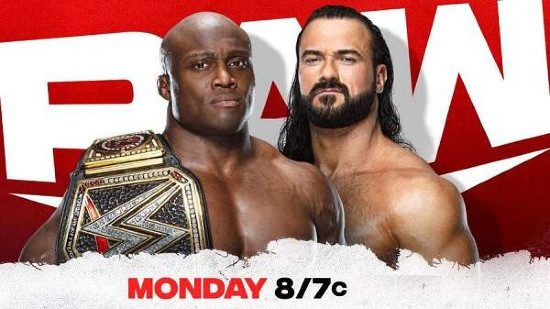 # Bobby Lashley Vs Drew McIntyre Build to Wrestlemania. Bobby Lashley’s offer to the WWE locker room stands heading into Raw.
* Drew McIntyre just might have a target on his back.
After Shelton Benjamin & Cedric Alexander came up short last week, Bobby Lashley issued a challenge to the WWE locker room to anyone who can take out McIntyre before WrestleMania. In return, the Superstar who takes it upon himself to do so will receive a WWE Championship opportunity against The All Mighty.
Will anyone take up Lashley on his offer? McIntyre intends to find out exactly that.
Don’t miss Raw live this Monday at 8/7

# Asuka and Rhea Ripley set for a WrestleMania Contract Signing
* Rhea Ripley wasted no time making an impact on Raw, immediately setting her sights on Asuka’s Raw Women’s Title.
The Nightmare and The Empress will both be live on Raw this Monday to make their WrestleMania showdown official with a contract signing.
What will unfold when these two step into the same ring less than two weeks from The Show of Shows?
Find out this Monday on Raw live at 8/7 C

# Riddle has payback on his mind in a battle against Sheamus
* Was it something he said, bro?
After Sheamus slugged Riddle right in the gut with his own scooter, the United States Champion seeks some payback this Monday as he is set to square off with The Celtic Warrior in a non-title match on Raw.
Does The Original Bro have what it takes to put another notch in his win column, or will Sheamus get the best of him once more?
Find out on Raw live this Monday at 8/7 C