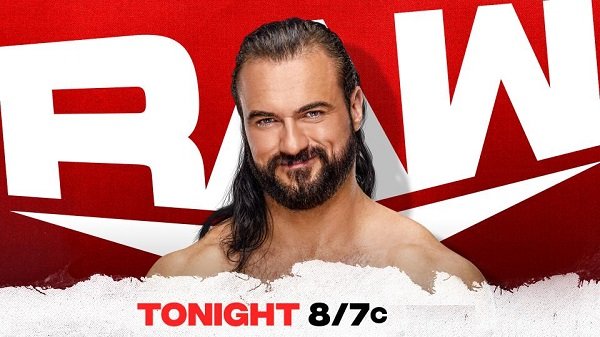 # The Hurt Business continue to implode as Bobby Lashley takes on Cedric Alexander
* The Hurt Business is over for Cedric Alexander & Shelton Benjamin, but their beef with Bobby Lashley is far from it. After being kicked out of the group and brutally attacked by The All Mighty, Alexander is on a mission to right that wrong when he goes toe-to-toe with the WWE Champion this Monday. Will Lashley show off his dominance one more time before defending his WWE Championship against Drew McIntyre at WrestleMania, or will Alexander completely derail the titleholder going into The Show of Shows? Don’t miss Raw this Monday at 8/7 C

# Drew McIntyre looks to overcome obstacle of King Corbin before WrestleMania
* It was an offer fit for a king, and King Corbin knew it.
After Drew McIntyre was outnumbered and attacked by Corbin and WWE Champion Bobby Lashley in hopes of taking out The Scottish Warrior before WrestleMania, McIntyre aims to retaliate this Monday when he squares off against SmackDown’s royalty in one-on-one action. Can McIntyre overcome this final obstacle on The Road to WrestleMania, or will Corbin succeed and take him out for good? Find out on Raw this Monday at 8/7 C

# Xavier Woods and AJ Styles set for rematch five days before WrestleMania title clash
* Xavier Woods and AJ Styles are set to tangle one more time in a pivotal collision before their teams face off at WrestleMania.
They’ll meet in a rematch this Monday night on Raw at 8/7 C on USA Network after Woods won last week’s bout by disqualification but was left in tatters thanks to Omos’ epic display of power. The Phenomenal One’s personal colossus tossed Kofi Kingston over the WWE ThunderDome barricade and decimated Woods with a massive slam before Styles symbolically counted three – perhaps a sign of what’s to come in their Raw Tag Team Title Match on Night 1 of WrestleMania 37 this Saturday. Can Woods claim a big victory for the Raw Tag Team Champions five days before these duos clash? Or will Styles show that The New Day are on borrowed time with the gold?

# Asuka & Rhea Ripley to collide with WWE Women’s Tag Team Champions Shayna Baszler & Nia Jax
* If their volatile contract signing was any indication, Asuka and Rhea Ripley are about to tear each other up on the Grandest Stage of Them All.
But first, the WrestleMania opponents will attempt to coexist as they face WWE Women’s Tag Team Champions Shayna Baszler & Nia Jax this Monday night on Raw in a non-title matchup.
Asuka declared last week that Ripley was not ready for her, and The Nightmare responded by bludgeoning The Empress of Tomorrow face-first with a table. Slighted by the WrestleMania spotlight afforded to the Raw Women’s Champion and her challenger, Baszler & Jax extolled their own dominant run as champions before issuing this challenge. Can heated rivals Asuka and Ripley stay on the same page before they lock horns at WrestleMania? Find out this Monday at 8/7 C