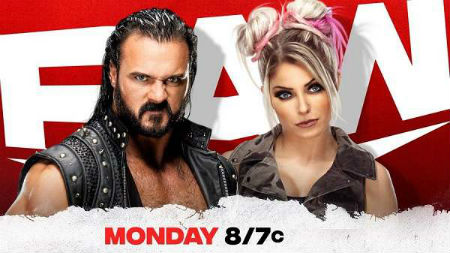 Preview : Drew McIntyre has had only one thing on his mind since WWE Hell in a Cell: Regain the WWE Championship. Alexa Bliss will welcome the Scottish Superstar to “A Moment of Bliss” after hosting the current WWE Champion Randy Orton last week.
McIntyre made his championship intentions clear last week, but he’s not the only one who has targeted The Viper. The Fiend will deliver his own message to McIntyre on behalf of Bliss on Monday Night Raw. The Miz & John Morrison were also incensed after McIntyre Claymore Kicked The A-Lister’s Money in the Bank cash-in attempt.
Will “A Moment of Bliss” serve as another trap for its latest guest? Or can McIntyre turn the tables on the host and his rivals?
Catch the always controversial talk show this Monday at 8/7 C on Raw

* Drew McIntyre to stop by “A Moment of Bliss” this Monday
* Jeff Hardy, Riddle and Elias get second chance at Survivor Series Qualifying
* Whats next for the New day & the tagteam division.
* Retribution Segment
* More cards after Official word.