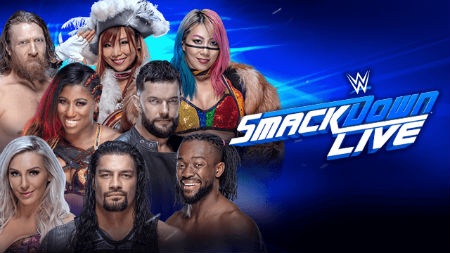 Preview :  How Far Will Roman Reigns go to assert his control over Smackdown.
* Last week After defeating Uso with the Stunner, Owens handcuffed his defeated opponent to the ring ropes and proceeded to punish him in an effort to get Reigns to come to him.
But when he handcuffed Uso’s hands together and looked to continue the onslaught out in the ThumderDome, Roman Reigns ambushed him. Together, Reigns and Uso absolutely destroyed KO, slamming him into the LED screens before The Big Dog hurled his adversary off a ledge, sending him crashing down through a table.
What has Roman Reigns planned for this week to the KO or any one that stands against him.

* How Far Will Roman Reigns go to assert his control over Smackdown.
* Big E Defends the IC Title against Apollo Crews
* The Street Profits take on Dolph Ziggler & Robert Roode in a SmackDown Tag Team Title Match
* Will the legends night extend to Smackdown.
* More Cards